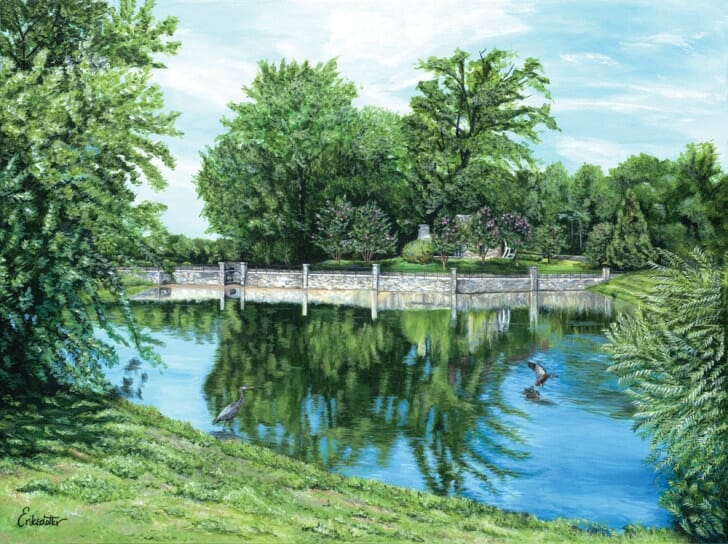 Evans Farm is a commissioned piece that a son and his family gave to his father for his 85th birthday. The Father received a gift certificate for the custom order and this past fall we sat down to discuss what they wanted. They decided on a view of Evans Farm – a historic location in McLean, Virginia, which has special meaning to them.

In the process of working out the details of the painting, the client shared with me that many birds like to visit the pond and how his wife likes to come up with stories about them – “so much so that there should be a children’s book about these birds!” Of course, they needed to be part of the painting so I included a blue herring, a mamma duck and her ducklings which brings great life to the piece. 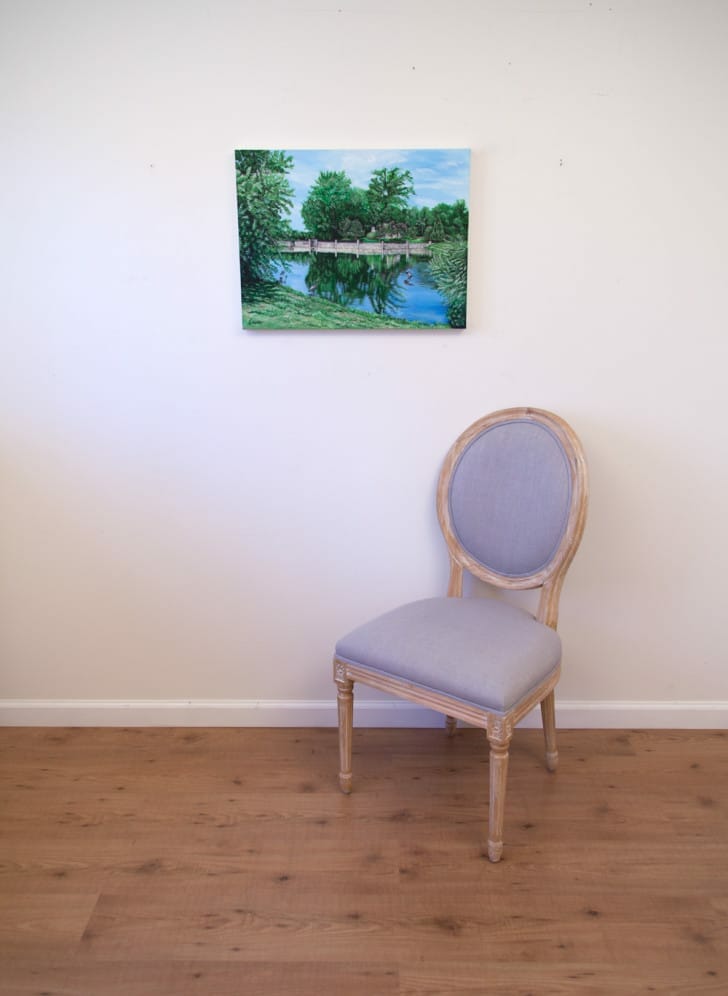 The painting measures 18×24 inches and is painted on a 1.5 inches deep gallery wrapped canvas (46cm x 61cm x 4cm). The sides are left unfinished as the client is framing the piece. It’s signed on the front and signed and dated on the back. This piece is available as limited edition print.

A short history about Evens Farm
Evans Farm and the Evans Mill Pond was part of a large plantation in the 1700’s owned by the Besley family, who most likely received it as a grant issued for settlement in the new country. Before then, the Indians of the Powhatan Nation likely used the land and the woods as hunting ground. Before the outbreak of the Civil War, in 1849, Lewinsville, Virginia, was created largely from land owned by the Besley family, then into their fourth or fifth generation.

By the time the Civil War was over in 1865, there was little left of the farm and the family had to rebuilt it. More than 200 years later, the family sold it and eventually the Evans Family bought the land in 1940’s.  They built an upscale restaurant, the stone mill house that you see in the painting, and other buildings to create the appearance of a Colonial-era farm, with lots of animals for the local community to enjoy. It was very popular local attraction.  What you see in the painting is what is left of the Farm. The stone mill functions now as a historic visitor center and the remaining of the land is all residential property. (see below for sources)

Today is a two-post day so keep scrolling for behind-the-scenes photos from when I was painting this piece.