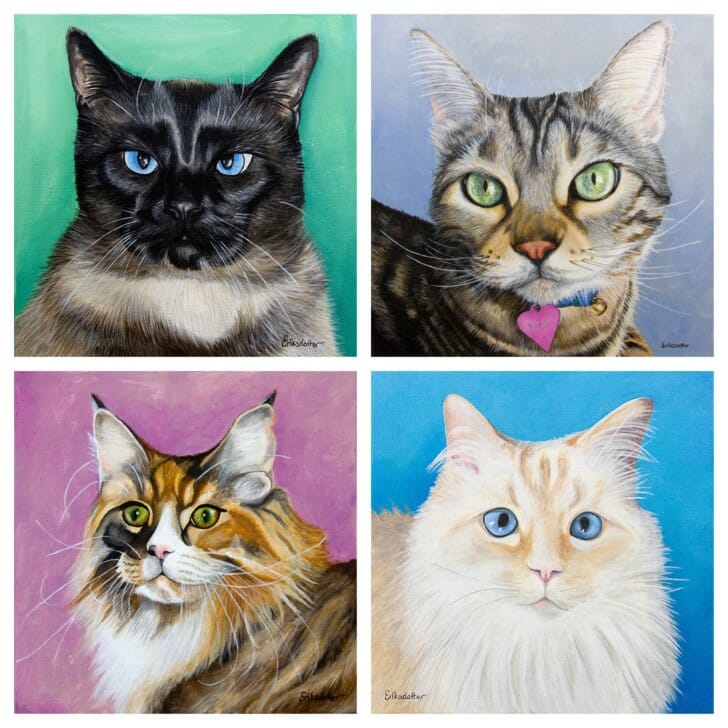 Happy National Cat Day!  To celebrate this awesome day, my kitties and I thought it was only appropriate to offer 10% OFF PET PORTRAITS ordered today by midnight. All furry little friends are accepted, not just paintings of our feline powerhouses.

Place your custom order, and I will send you an invoice for the down-payment to be paid by Oct. 29 at 11:59 PM to receive the 10% discount. Offer cannot be combined with any other discount. Open to all countries. See pet portrait portfolio. 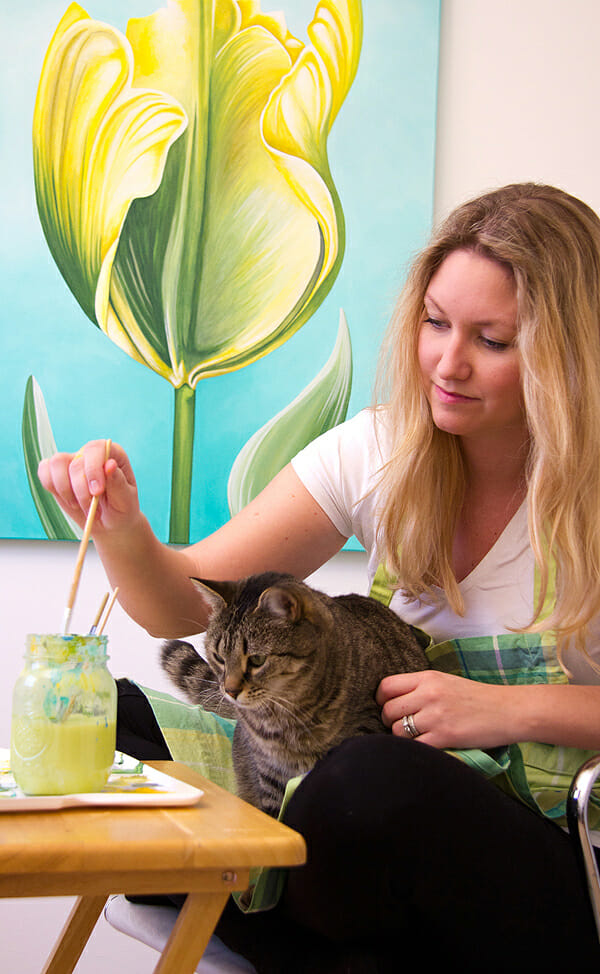 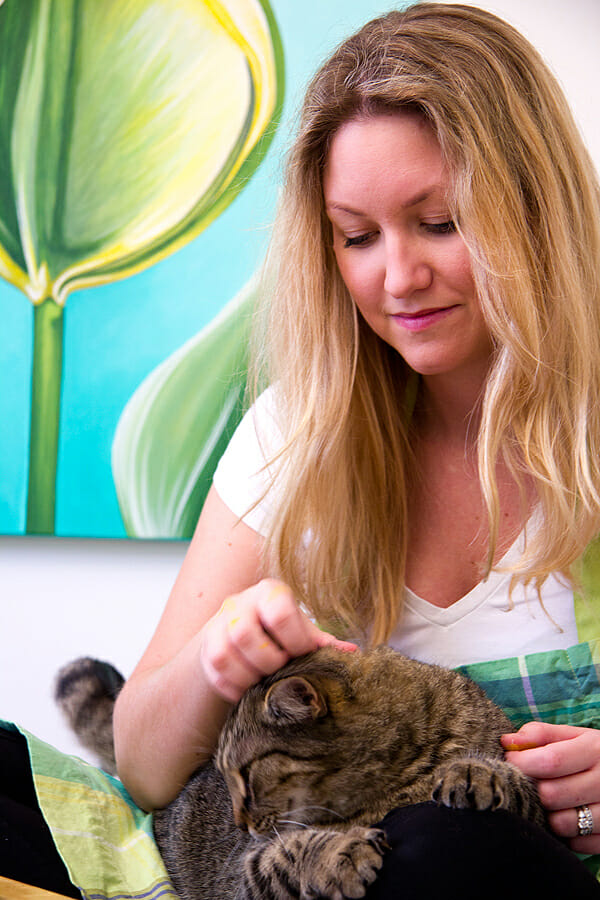 My cats play an important role in my life. Lola, then a cat I had never seen before, kept coming up to our patio every day for 3 weeks. She laid in my lap for hours as I read my book (something I never normally let a strange cat do). I thought for sure she had a home as she looked well-fed and happy. She would run to patio every time I would open the door, morning and night. Eventually I realized she didn’t have a home, and begged Casey (who is allergic to cats) if I could foster her. I had fallen pretty hard but understood that we couldn’t keep her since it would make him ill.  I started calling her Lola because the name kept coming to me… and because I thought she was a boy at first… LO-LO-LO-LAAAA.

Since all of our neighbors in our little cul-de-sac had seen this cat roam around, and even put out food for her, I wanted to make sure they knew I was taking on the responsibility of being the caretaker. So I walked around to the neighbors, one by one, and said “hi, you know that cat that we’ve been seeing around for weeks? Well, I’ve decided to take her on and make sure she’s safe and fed. Oh, and by the way, I’m calling her Lola in case you hear me call for her.”  In every separate case, each neighbor stopped blank when I mentioned I called her Lola and all said the same thing “no way, I’VE been calling her LOLA!”

So that’s how powerful my little Lola is and of course, after a month in the house I couldn’t let her go, and Casey didn’t ask me to either because magically… he wasn’t allergic to Lola.  She loves being in the studio with me and often lays in my lap while I paint. She’s a healer for sure and helps me add such great mojo into all the paintings I do.  If you follow me on instagram (@studioeriksdotter) you’ve probably also seen when she’s not as helpful as well and accidentally dips her tail in my paint or starts biting my paint brush.

After 4 years of patiently waiting, she finally got her own portrait this spring which fine art print is for sale. 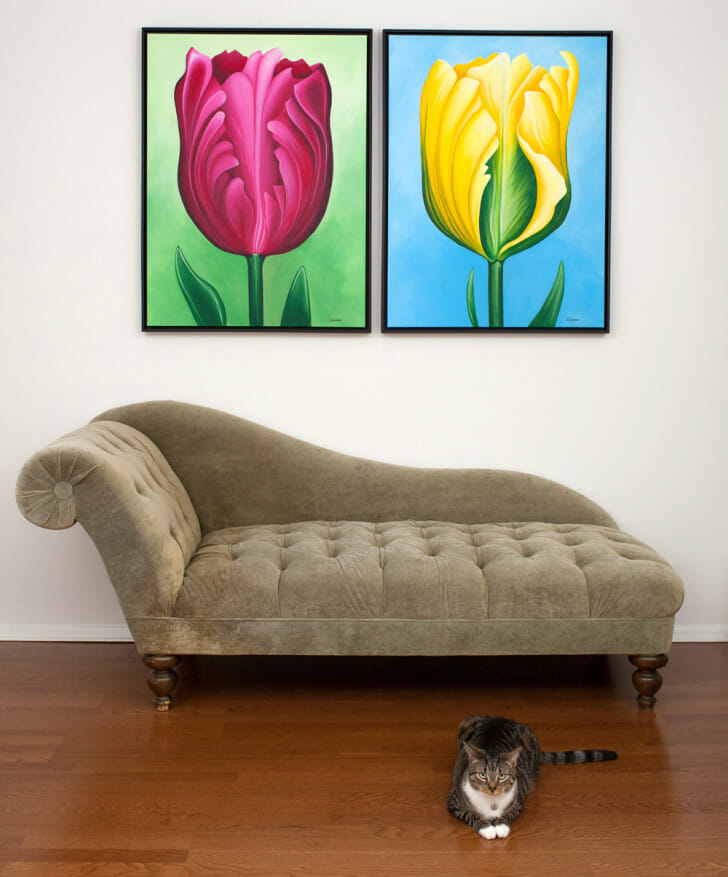 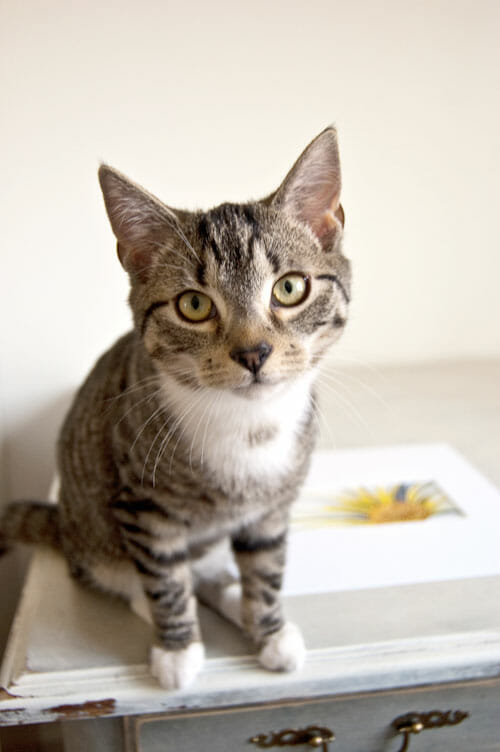 Rasmus is our other darling kitty.  We had debated for a while to get a second cat to keep Lola company as we were doing many art shows up and down the East Coast. Out of habit, I was checking out the shelter kitties while picking up cat food and one day there were three 15-week old kittens – all brothers named after the Beatles (John, Paul and George). A sign said you had to adopt at least 2 of them so I picked up my cat food and went my marry way. Two weeks later, I was back at the store and saw that Paul was the only one left and I took one look at him and the name “Rasmus” popped into my head (it’s from a wonderful Astrid Lindgren story about an orphan). I called Casey and said “Honey, it’s too late, I’ve named a kitten. We HAVE to get him.”

Rasmus is the opposite of Lola in every way, except that he’s a snuggle bug – as long as it’s on his terms. He doesn’t help in the studio, but does encourage me to take breaks (equally important) to play or snuggle with him. He’s a scardy cat who grows braver and braver by the day and now likes to spend as much time on the patio as he can. He’s not the master-hunter like Lola, but instead likes to sit directly underneath the bird feeder. The birds humor him, and the chipmunks lets him play tag with them.  I sure do love my little razzie pazzie.

Animals are key to our well-being, and I was fortunate to discover that at an early age growing up with a Yorkie named Lucas. If you have the room for some extra love in your life, consider adopting a cat and rescue one of the 4 million cats entering shelters every year. Read about why National Cat Day was founded and why.

I’m so glad you tweeted to I HAVE CAT! I love your website, your art, and the story of how you got your kitties! They look so loved and are so fortunate to have such a wonderful home!

Aww i’m so glad you love my art and thank you for your wonderful comment. We are the fortunate ones for sure to have those little stinkbugs in our lives. 🙂